THE HEALING OF CONGRESSMAN UPSHAW

THE HEALING OF CONGRESSMAN UPSHAW 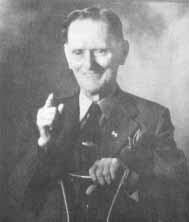 William David Upshaw was a Southerner, born on October 15, 1866, near Atlanta, Georgia. Just two years before his birth, the roar of cannons and the smoke of the battlefield had risen into the air above this strategic Confederate city as Sherman's troops marched through its streets in a campaign that spelled the beginning of the end for the Civil War. On April 9, 1865, the cataclysm was over, and battle-weary soldiers returned to their families. Stripped, scarred and humiliated, what was left of Atlanta and its citizens slowly began to heal and rebuild. A new generation of leaders for the re-United States was born.

Young William's father, Isaac David Upshaw, was a Confederate veteran and former schoolteacher. During the Reconstruction Era that followed the war, he tried his hand as a shopkeeper in Atlanta, but the pandemonium and competitiveness of city-life conflicted with the devout, Baptist upbringing he desired for his children. A few years after his son's birth, Isaac settled his family on a farm near Powder Springs, Georgia, forty miles north of the capitol city.

In 1884, at age 18, the carefree days and farm-boy routines ended abruptly for William when he fell on the crosspiece of a hay wagon and fractured his spine, paralyzing the lower half of his body. He was confined to his bed for the next seven years, a helpless cripple.

Although he was helpless, he knew with assurance that he was far from being hopeless. Shortly before his accident, he had given his heart to the Lord Jesus, and now he turned to the only One he knew who could sweeten the cup of bitterness that had been thrust upon him. He testified throughout his life that "The Lord Jesus who had given me a new heart in Him, walked with me through the valley, and made that vale of tears for seven years a mountain height of joy and victory."*

From his bed of affliction, he began to write regularly a column of poems and inspirational letters for a local newspaper called Sunny South, using the pen name `Earnest Willie.' His gentlemanly manner and gifted style of writing soon endeared him to the hearts of his readers. He was encouraged to publish his writings in a book, which he did, titling it "Earnest Willie, or, Echoes From A Recluse."

William Upshaw possessed both intelligence and principle. His confident attitude was reinforced by an enduring faith in God which he testified of unwaveringly. His writing revealed a strength of character that would someday make him a leader in his community, his state, and his country. Above all, he was sincere, and, as his writing revealed, he recognized and appreciated that quality in others as well.

"To those who have been generous enough to say that the name `Earnest Willie' suits me because I seem to be in earnest, of course I feel very grateful indeed. Enjoying as I do, with the intensity of my nature pure mirth and innocent jest, still, in the real and serious things of life, I do believe in being deeply in earnest. It is the very passion of my soul. Earnestness is the secret of nearly every man's success, and it is the lever that persistently pushes to completion nearly every movement for reform, whether it be great or small. Let a minister of Christ or any other speaker convince me first - aye, all the people who hear him - that he is in earnest - that his very heart and soul are in his work, and then he may break the rules of grammar if he wants to, just so he breaks and blesses human hearts."

Excerpt from: "Earnest Willie, or Echoes From A Recluse," page 23.

By the time he had regained a degree of mobility through the use of crutches and a wheelchair, proceeds from the sale of his book had generated sufficient funds for twenty-nine-year-old William to enter Mercer University in 1895. In addition to study, his college days included a busy schedule of writing, public readings from his works, and lecturing. He was an articulate champion of Christian values, good citizenship, and prohibition.

William Upshaw was elected to the U. S. House of Representatives on the Democratic ticket in 1918. He was re-elected in 1920, 1922, and 1924, earning a reputation as a colorful, energetic legislator who fought to eliminate the teaching of evolution from public schools and encouraged his colleagues to sign sobriety pledges. Congressman Upshaw's disillusionment with both the Democratic and Republican parties on the liquor question caused him to change his political affiliation in 1928, when he was at the height of his career. He joined the Prohibition party and became their presidential candidate on the 1932 ticket. He campaigned aggressively, but unsuccessfully, and when prohibition was repealed the following year, he quit politics and returned to lecturing.

Between the years of 1933 and 1952, William Upshaw traveled across the United States as president of the National Christian Citizenship Foundation, preaching against liquor and Communism. He was ordained as a Baptist minister in 1938 at the age of seventy-two. Four years later he once again tossed his hat into the Georgia political arena as a senatorial candidate and, once again, he was defeated. In 1949, he and his wife moved to California where he served as vice-president and faculty-member of the Linda Vista Baptist College and Seminary in San Diego.

Congressman William Upshaw prayed for healing all his life. Even in 1951, at eighty-four years of age, he was still seeking that "appropriating faith" that he believed would deliver him from the crutches that had been his companions for more than half of a century. It was a time when the ministry of the healing revivalists was at the peak of its popularity, and the Congressman had sought the prayers of the most well-known ministers of the day, including William Freeman, Oral Roberts, and Wilbur Ogilvie. But, as he later testified, "I just could not take hold and walk out."

At a meeting of the Southern Baptist Convention, of which he served twice as vice-president, he became acquainted with a man named Dr. Roy Davis who told him about a young minister he had ordained many years before at the Baptist church in his home town of New Albany, Indiana. That young man was now crossing the country praying for people, and his ministry was unlike that of others. He suggested that the Congressman seek him out. His name was William Branham.

On the evening of May 2, 1951, Brother William Branham had finished preaching his message and was preparing to call a prayer line to the pulpit. The sanctuary of Calvary Temple in Los Angeles, California, had been packed every night of the campaign, but of the hundreds that had come seeking healing, only a handful each night would have their prayer card number called to pass before him in the discernment line. Suddenly, even before the line could form, a vision broke before him and he related to the audience what he was seeing:

"A young man falling from a hay stack and braking his back. A doctor with a white mustache and glasses that sit low on his nose, working on the young man, but to no avail. The youngster grows to become a famous person who writes books. People are applauding him."

When the vision left him, Brother Branham once again turned to the ushers and began to call for the prayer line to be formed. Brother Ern Baxter, the manager of the campaign, stepped to his side and told him that the man from the vision was in the building and had identified himself to an usher. His name was William D. Upshaw, a former congressman of the United States, and he wanted to speak to Brother Branham. A microphone was handed down to where the invalid statesman sat in his wheelchair. "My son," he asked, "how did you know that I fell and hurt myself when I was a boy?"
"I can't tell you, sir," was the reply. "I can only say what I see."
"God bless you, my boy," the elderly man responded.

For the next few moments, the audience sat riveted as people passed before the humble man of God and were told of their ailments. "Others were being healed all around me," the congressman wrote later in his testimony. "Then, Brother Branham lifted his hands, saying, `Lay your hands over on each other.' A great volume of of prayer ascended throughout the audience of more than 3000. Angels were hovering near!"*

Exhausted, Brother Branham was carried from the platform, but before he could exit the building, once again, by vision, he saw William Upshaw, and this time he was walking down the street without the aid of his crutches! A moment later, Brother LeRoy Kopp, pastor of Calvary Temple, rushed to the pulpit and announced, "Brother Branham says, `The congressman is healed.'"

Instantly, a man that had not walked for sixty-six years stood to his feet and started toward the pulpit.

William Upshaw retained the full use of his legs for the remainder of his life, and he traveled across the country testifying of his healing. Shortly before his death at age 86, he published his testimony in a tract which he sent to every Senator and member of the House of Representatives, President Truman, Winston Churchill, and King George of England. He died November 21, 1952 and was buried in Forest Lawn Cemetery.

In a message entitled "Who Hath Believed Our Report?", preached on July 19, 1951, referring to Congressman Upshaw's healing, Brother Branham said:


"I feel that he was the one that the Angel of the Lord was referring to when He met me and said, `You'll pray for great men, statesmen, kings of the earth.'" 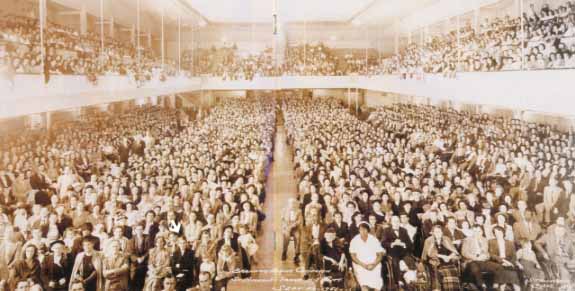 Adapted from the Magazine "Only Believe", published by Believers International In March 1983 - Vol. 6 No. 1.