PILLAR OF FIRE PHOTOGRAPHED IN SWITZERLAND 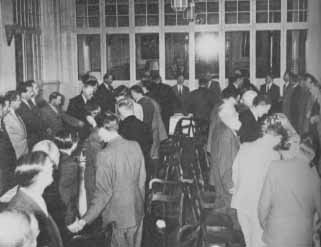 Once again The Eternal breaks into the Dimension of time that He might be caught by the eye of the camera. Once Again God shows the world that this was no 'ordinary' ministry which it was witnessing. Still, many have not caught on to What God did (and is) doing through that ministry. BUT "though one rose from the dead, the majority will not believe". Yet, those who do believe, Glorify God in His Servant.

Before going to Switzerland the Lord led Brother Branham to go to Germany. Hearing of this, the Swiss Church attempted to persuade the German church leaders to keep Brother Branham out of Germany. But God gave the victory. Brother Branham explains the details as follows:

The state church in Switzerland was against me. They were against Billy Graham, as you seen the write-up that brother got in the paper. And the reason they was against him, because he believed in the supreme Deity of Jesus Christ.

The Swiss church doesn't believe that Jesus was the virgin-born Son of God. They come from the Zwingli. First was Luther, then come Zwingli and Calvin, and so forth. And Zwingli was in Switzerland, and they - the state church is built upon his doctrine, they believe that he was (in their own books and everything they declare it), that they believe "He was the son of Joseph, called the Son of God. He was the prophet that Moses spoke of would come, but actually Joseph was His father." That knocks every prop from under Christianity. That takes every Divine thing away from it. He was absolutely the virgin-born Son of God, and Joseph had no more to do with it than we have to do with it. That's right. He was the virgin-born Son of God, and I believe that with all my heart, soul, mind, and strength.

And then I come right in behind Billy Graham, and I started the same thing. Oh, my, they bitterly opposed It. And then when they rose against me, and then give that write-up against Billy, then the Catholics come around, said, "See, they're both no good!" Oh, if people could only get their head right or their heart right, one.

So then when they did, it went up in Germany. And when we was to come up to Karlsruke, Germany, they wrote up there to the state church and told them not to receive me because I was an impostor. So the church and state is together there. What the church says, the state has to do. Then the authorities told them they couldn't have it. But Doctor Guengebuhl, a very smart lawyer, that's one of our sponsors there, he didn't take "no" for an answer. He went right on down to the major in the United States Army. And he said, "Tell Brother Branham to come on. The rest of them can come, he can too." So they give me a chance to come into Germany.

The first night, they had to mill around me to keep the communists from taking a shot at me. Someone had come at nearly getting Billy, my boy, but the Lord was with us. And they just kept walking around. So, in the dark, they couldn't take a shot...

And on the second night, God gave sight to a total blind girl, eight years old. Then the state church and their pastors, and all, got together, and wanted to have a meeting with me, they wanted to ask me some questions.

We went to the breakfast. And, at the breakfast, they had taken a big German camera, and set it up like this. Up in the day, there was plenty of light, they needed no flash or nothing. They were taking the pictures of the breakfast, and so, when they did, they taken several pictures.

And they said, "Now, Brother Branham, we believe that God is with you. But, them visions, we can't understand it."

"Oh," I said, "I couldn't explain it, because it's God. And you can't explain God, you've got to believe God. God's not known by scientific, God's known by faith." Well, they couldn't see that at all, you know.

And just at the time, the sovereignty of God, right when the strain was on, I said, "Just a moment, here He is now." And I said, "He's coming now." Well, that German camera, they just moved it right on Him. And the German thought he'd try a few shots. So he took the picture. And, when he did, the Holy Spirit come down, I said, "The man standing right here to my left, he's a stranger among us all this morning." I said, "He's not a German, neither is he a French." (I was at Lausanne at the time.) I said, "He's an Italian. And he's been the leader of thirty-two thousand Communists." And the boy started crying out. And I said, "Now he's picked up a Bible. His background is Catholic. And he picked up a Bible one day and was reading where Jesus died for his sins, and he accepted Christ. Now he's persecuted, he's run a little orphanage up in the mountains. He can't eat his breakfast this morning, that's why he pushed his plate back from his table, because he has an ulcer in his stomach."

And the boy raised his hand, said, "Every word of that's the Truth."

I looked at him, he was gray-headed and eating a good square meal, I said, "But THUS SAITH THE LORD, eat your meal because Jesus Christ has made you well." See? He set right down and started eating.

That German camera was standing there taking those pictures. They taken about a dozen before and a dozen after. And when they developed them, there was the Angel of the Lord right on their picture, coming down. There it happened. So showed Him coming down, when He enclosed around where I was standing. The next thing showed where He was going away, you'll see half of It that way as It's moving away. And I had my hand up, and saying "It's THUS SAITH THE LORD. It's finished," like that.

And I have them here tonight so that I could show them to you. I don't know how well you'll be able to see them from the platform here. (The pictures are presented in this page) Sometime we might develop them if we get somebody that'd want them, and we could maybe make negatives from them and put them into print. I've never had a time that the gift of God was ever questioned but what God come right down and done something outstanding. So criticism is perfectly welcomed. Amen. And we love to see it, 'cause always waiting to see the glory of our Lord God.

Now I've got them here. You may not be able to see. It's a picture of the breakfast. Now, here's all the ministers. The camera's setting back here. See where the lights is in the building, up here? And it was eleven o'clock in the day, doesn't need any light of any type, Now, that's the first picture.

And here's where they all stood to their feet. And there's the Angel of the Lord coming down. See? And here's the man standing, and that's me and my hand pointed towards him. And this is him standing here with a Roman collar on. That's explaining to him what it's all about. That's when It's coming, just started down. See, It's just above me. This is me standing right here, and It's just above me.

Now, here's the next picture, when It done settled down over their head like that. It's down over them, and the vision is going on.

And here's the next picture when It's leaving away, and just half of me can be seen there, where the Angel of the Lord has still got it masked over, just half of it, going away.

And here's the next picture afterward, it's perfectly clear, normal. There's nothing there, see, after It had gone away.

These people in the pit here, I never noticed, they didn't get to see it. Why, kind of show it, if you don't mind just a moment. 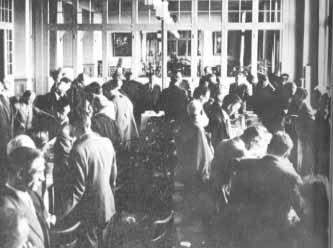 There's the one before, see, see, that's the picture that was before anything was taken. And here is the Angel of the Lord coming down. 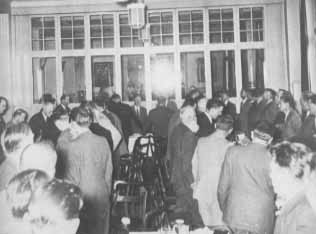 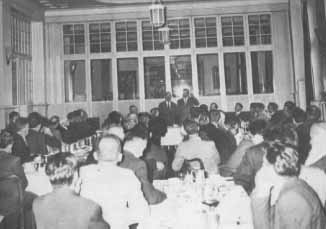 And here's the picture afterwards, but there was nothing left in the building, And we got around twenty-something pictures between these two things, And cameras stationary, setting at the same place, and nothing at all shows any other wise. So it just goes to show that our dear Lord Jesus still lives and reigns. Doesn't He? And He's wonderful, exceedingly, abundantly, and we love Him with all of our heart.