22 FEET OF WATER OVER SPRING STREET 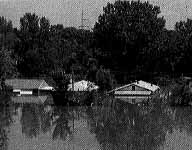 Sometime during the fall of 1936, while ministering in his Tabernacle in Jeffersonville, Brother Branham, prophesied of "a flood" that would caused the waters to rise to a height of 22 feet over Spring Street in Jeffersonville. A number of people present in the Tabernacle at the time said, "Get next to yourself Billy. In 1884 it was only was about six inches on Spring Street." They laughed at him saying, "Billy, you're just excited."

But he stood firm and screamed out, "I'm not excited! It's THUS SAITH THE LORD! I seen a man come down from the skies, and take a measuring stick and put it there on Spring Street, and it measured twenty-two feet."

As the word spread about Billy Branham's prophecy, he was mocked. People said, "You're crazy. You're off at your head." When he advised the workers at the Falls City Transfer Company, of coming flood they said, "Ah, Billy, go on home." But less than six weeks from then, twenty-two feet of water measured over Spring Street, just exactly the way It said.

But little did Brother Branham know the implications that this flood would have for him, personally. It would have a "three-fold" effect on the Prophet:

1. It vindicated his Ministry and Prophecy.
2. It would cause him to feel sorrow as he would never know it again.
3. I t would be a turning point in his Ministry

Today, there runs through the City of Jeffersonville a wall - 22 feet high, designed to hold back the waters in the event of another flood. BUT that wall stands as proof of the flood and as a mute testimony to the "vindication" of God's Servant and Prophet to the Twentieth Century.

During the flood young Rev. William Branham, outdoorsman and experienced riverman, set out with his boat to rescue all the familes he could from the swelling waters of the Ohio River. At his Tabernacle, the flood waters had risen so high that the pews and the pulpit had floated to the ceiling. And when the flood waters receeded the pulpit came back down in the exact spot where it had been sittng; The Bible was still open to the same place that Brother Branham had left it and not one drop of water had touched the Word of God.

But while involved in the intense rescue efforts that were on-going for quite an extended period of time, Brother Branham became separated from his wife and children for many days. During the course of the flood large portions of the population were evacuated to different areas on higher ground. Make shift hospitals and dormitorys were sit up to accommodate the sick and displaced people.

In the confusion of people moving from one place to another, Brother Branham was unable to locate Sister Hope and his children. He searched frantically, following up on every bit of information he could gather from others who had seen his family here and there. The end of his search would be devastating for the young Prophet and family man. He eventually found his young wife, but she was in a dying condition. As you will read in the page which gives details of her 'home-going', she only lived long enough to bid farewell to her husband. Within twenty-four hours of his wife's passing, he was notified that little Sharon Rose was also dying.

William Branham was overwhelmed with grief. Hurrying to the hospital, he ran to see his little girl who was now placed in isolation, in the basement of the hospital. He knelt and tried to pray as he watched little Sharon Rose's body quiver with spasms. He said that as he tried to pray, it was as if a big black sheet had dropped down. His wife was dead - sorrow! Now, his child lay dying - more sorrow! But now, even God had refused to hear his prayer - Sorrow beyond compare.

There in the basement of that old hospital, God called His Prophet into question. He was tried and found wanting in obedience. God held His peace while the enemy went to work on Brother Branham's faith. After debating back and forth with the Devil, his faith was triumphant. He cried out, "The Lord gave, the Lord taketh away, blessed be the Name of the Lord". Then everything began to fall into place. He realized the Truth of what his young wife had told him before she passed away. The Light began to dawn in his soul. He had disobeyed and refused to go into the field of Evangelism when God had called him just a couple of years previous. He was now learning obedience through the things he was suffering. From henceforth, he would always say, "It best to always obey the Lord."

Thirdly, this experience in Brother Branham's life would be a "Turning Point" in his Life and Ministry. In obedience to the Lord's call he would now enter the field of Evangelism and his ministry would begin to spread accross the Nation. Within a few more years he would be commissioned by an Angel sent from the Presence of God and his ministry would spread around the world.

Return To The Highlights Page