A SON, JOSEPH IS BORN 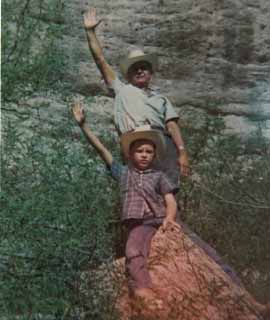 Thus were the words of the Angel on that day when Brother Branham was in meditation, studying the Life of Joseph in the Bible. So great was his respect for Joseph that God spoke to His Servant, Brother Branham, and made him a promise - a son. But before the child was born Brother Branham would endure much ridicule and criticism from the people.

In the following paragraphs Brother Branham explains "how" he received the promise and the things which took place before the promise was filfilled.....

I remember that up here in "Twin City," I think Brother Brown and them was with me, and I was taking the life of Joseph, in the Bible. And I read that Bible, there was a man there was nothing against! Abraham, Isaac, Jacob, and all of them, had something against them, but not Joseph. What a man, a perfect man, a perfect type of Christ!

When I read that, I just got to crying, one day, in my little ol' hotel room. And I went over in the closet where I had my clothes hanging, pulled the door together, and I said, "God, I want to thank You for a man like Joseph, a man who once lived on the earth, a man in flesh like I am, a man that could believe You and take Your Word." He was hated of his brothers. He couldn't help being spiritual. He saw a vision. He could interpret dream. All of them hated him for it. He couldn't help that, that's just what he was.

See, it just wasn't to the others. They ought to have loved him, but instead of that... When he told them, sometimes things against them, "Oh," they say, "here comes that dreamer." See? And they hated him without a cause.

I said, "Why did they do that?" And yet that man never moved, he stayed right there. See? I said, "Thank You, Lord. O God, thank You for such a man."

And right then the Holy Spirit revealed to me, said, "You'll have a son, and you'll call his name 'Joseph.`" I got up from there and thanked the Lord.

Becky, setting back there, had just been borned. She was about a year old. She was born with caesarean birth, it runs in my wife's family to be caesarean; 'cause they don't unhinge like the woman should, the bones are solid like a man, and she had to be cut from her mother. And the doctor told me, he said, "Brother Branham, don't you never have another child by this woman." Said, "Her womb is as thin as a balloon." He said, "You'd better let me tie those tubes."

He said, "Well, she shouldn't have another child." Said, "You're going to ruin her, she will die." Said, "We had an awful time there; she just did come through."

Just the same as that little boy was raised up, in Finland, from the dead. Brother Jack was right there when it happened. Told you, two or three years before it happened, "There'd be a little boy," how he'd be dressed, where he'd be laying. "God said so!"

"I don't know! But it was revealed to me that it was going to happen!"

It was revealed to me, "I was going to Arizona, and there I'd meet seven Angels. And they would tell me then what... a Message that I was to preach." And that was the Seven Seals. It happened! How many remembers me saying that? The tapes and things will go to that. And it happened! Magazines, everything else, took the picture of It. That Light there in the air, they can't even understand It yet. There it was.

Now remember, four years later, my wife was going to have a baby. Everybody said, "Is this Joseph coming?"

When it was borned, it was Sarah. Then a man called me up, and laughed in my face, he said, "Say, you know what? You mean Josephine!" The man died. The man died.

There was three people that left a certain denominational church and come to our church, and heard me saying that. When Sarah was borned, they said, "Why, he's a false prophet."

I said, "Wait a minute, lady, I never said when, neither did God say when. He told Abraham, they was 'going to have a Isaac,' but Ishmael was borned in between that time, but it didn't take It away." I said, "God said I'll have this boy and we'll call his name 'Joseph.`"

The doctor said, when he come up, he said, "Reverend, I'm going to tie those tubes now."

He said, "Well, you might get married again and have that boy yet."

I said, "I'm going to have it by her! God said so!" I couldn't read it out of the Bible, but it was wrote on my heart by revelation, by faith; God said so! Didn't want to stagger at the promise of God through unbelief.

The Doctor said, "She can't have another baby."

I said, "She will have another baby."

Four years passed, finally Meda was going to be mother again. Then a woman, (a false prophecy sent forth across the country) writing words, said, "Now Meda's going to die, during this time, because I was sent to lead Bill." And it said that "He won't listen to me 'cause I'm a woman, and God's going to get even with him now by killing his wife."

Poor little Meda. We had a nurse that had been healed there in a meetings, you all know, Mrs. Morgan, (and one of Mayo's nurses, the worse cases). Well, she's on the record, "dead," about twenty years ago, with cancer. "Succumbed with cancer," in Louisville, right on the Baptist hospital record. She's nursing in Jeffersonville, in the hospital, now. She's been there for all these years, 'cause God said "She'd live."

And, so, Meda loved her, and she said, "I want Margie come with me, Bill, I don't feel like going to the hospital."

And I said, "I don't know, but the baby's going to be borned anyhow. You're going to have a Joseph."

I took off up to Green's Mill. She'd got me all tore up, course I love her, and I went up to Green's Mill. And I went up to the mill to pray. And started over there, seen that Light hang between two trees, said, "Go back to your work and to your book." I went back to this - the Bible was laying in my car. And when I did, the wind had blowed it over to where Nathan was setting, and David; said, "Go tell My servant David; I took him from that sheepcote, from feeding those few sheep of his father's, and I made him a great name like the great man." (not all -the greatest name, but just like great man; never made him a Billy Graham, but give him a name, you know) Said, "Well, I done that, but" said, "I can't let him build the Temple, but his son..." And just as soon as It said, "His sons," oh, my, there it was.

Right there, in the house I went. And there's Meda, so big, she couldn't hardly walk, going out through the field. I run, throwed my arms around her, and I said, "Honey! Joseph is coming. Joseph is on his road."

The next morning, at seven o'clock, we went over to the hospital, the doctor said, "Oh, mercy, goodness."

I kissed her good-bye, said, "Honey, it won't be long, Joseph will be here." Went up the steps, she went like that on the operating table.

In a few minutes, the nurse come back; she said, "Rev. Branham, You got a fine, seven pound, three ounce, boy."

I said, "Joseph, son, welcome." Yes, sir! Why? Why? What is it? It wasn't written in the Bible that would happen, but the same God of the Bible that revealed it to Abraham, we didn't consider the deadness of her womb, the impossibility to being that way. You don't stagger at the promise of God through unbelief, but you give praise to God, know that it's got to happen! I don't care what doctor says, everything else will come in all kind of a way, but don't you believe it, it's a lie of the Devil. Yes, sir, truth. Faith goes about, together with works, to create the promise.

Taken From The Message "Works Is Faith Expressed" Preached On November 26, 1965
The date was May 19, 1955. Brother Branham, like Abraham, was strong in faith giving praise to God for the promise. He considered not the Doctor's evidence - he was looking at a promise of God. His son, Joseph had arrived - born into a household where the Manifestation of the Supernatural was almost an everyday occurance when his father was at home. But for Joseph it was to be short lived. Just over 10 years after his son's birth, Brother Branham was "Promoted to Glory".

Eventually, in God's time, Joseph would come to know the Saviour his father had talked about so much. Today, he lives with his wife and family in his father's home in Jeffersonville, Indiana. For the past few years he has been responsible for the day to day operations of The Voice Of God Recordings where, every year, thousands of copies of Brother Branham's Messages are reproduced on cassette tapes and in printed booklet form.