FIRST COMMISSION IS GIVEN 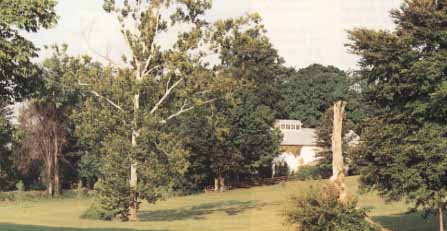 In Scripture God commissions his Servants the Prophets - He gives them Authority and Responsibility to take His Word to the people. The Bible tells us that the True Interpretation of the Word comes to the Prophet. Look at the authority and responsibility God gave to Moses, Joshua, Elijah, Elisha, Isaiah, etc. They Were authorized by God Himself to do what they did in their ministries. Concerning the Prophet Samuel, the Prophet with an 'open vision' ministry, it is Written that, "God did let NONE of his words fall to the ground". A study into the lives of such prophets as Moses and Elijah is a study of Divine authority and judgement made flesh in a man.

In this Twentieth Century, at this time in the life of young William Branham, God's Commission was simple and straightforward. The Angel gave him simple instructions concerning his youth and how to conduct himself in his daily life. This would prepare the boy for an even greater Commission to come. As time passed he would receive more and more insight into the thing that God had Commissioned him to do - A Commission that would place on his shoulders (like John The Baptist) the Authority and Responsibility of a Message that would "Restore ALL things" and 'Sit all things in order', Foreruning the Second Coming of the Lord Jesus Christ - A tall order indeed BUT William Branham , like John the Baptist in 'his' day, was God's Choice to fulfill that order in 'this' day. In the process of time Brother Branham would receive five commissions from the Lord. The fifth and final commission would be the climax of his ministry. He referred to the fifth commission as his "regular" commission - one of the main purposes of his ministry.

He was only a boy of Seven years old when he received the first indication of God's PLAN for his life. Not being raised in a religious family, young William Branham knew little or nothing about religion of any kind. Therefore when the unseen Angel 'spoke' to young William, out of a whirlwind, it frightened him.

In the following Paragraphs Brother Branham gives his personal testimony of what happened the first time that the Angel from the Presence of God spoke to him:

The Voice In The Whirlwind

And I remember one day, from the barn, coming up to the house, crying. Because out at the back of the place was a pond..... And one day packing water from back out at this pump, which was about a city block. I was squalling to who wouldn't have it, because I had come from school and all the boys had went out to the pond, fishing. I just loved to fish. And so they all got to go fishing but me, and I had to pack water for this 'Still'. Of course, my, that had to be mum, it was prohibition.

And It was such a hardship. And I remember coming along there with a stumped toe, and I had a corn cob wrapped under my toe to keep it out of the dust. You could track me everywhere I went, with this corn cob under my toe. I didn't have any shoes to wear.

And I stopped under this tree, and I was sitting there just squalling (it was in September) because I wanted to go fishing, I had to pack several tubs of water with little molassey buckets, just about that high, half a gallon, 'cause I was just a little lad of about seven years old. And I'd pour them in a big tub and then go back and get another two buckets and come back, pumping it. That's the water we had. And they was going to run off a batch of that corn whiskey that night, these man with Daddy, up at the house.

And I was crying, and all at once I heard something making a noise like a whirlwind, something like this: going "Whoooossssh, whoooossssh," just a noise like that. Well, it was awful quiet, and I looked around. And you know what, a little whirlwind, I believe you call them a little cyclones. And I was under a great white poplar tree, stood about halfway between the barn and the house. And I heard that noise. And I looked around, it was just as quiet as it is in this room. Not a leaf blowing nowhere, or nothing. And I thought, "Where's that noise coming from?" Well, I thought, "Must be away from here." Just a lad. And it got louder and louder.

I picked up my little buckets and squalled a couple more times and started up the lane, I was resting. And I got just few feet out from under the branches of this big tree, and, oh, my, it made a whirl sounding. I turned to look, and about halfway up that tree was another whirlwind, caught in that tree just going around and around, moving those leaves. Well, I thought nothing strange about that because it happens in that time of year..... So I watched, but it didn't leave off. Usually it's just a puff for a moment, then it goes, but it had already been in there two minutes or more.

Well, I started up the lane again. And I turned to look at this again. And when It did, a human Voice just as audible as mine is, said, "Don't you never drink, smoke, or defile your body in any way. There'll be a work for you to do when you get older." Why, it liked to scared me to death! You could imagine how a little fellow felt. I dropped those buckets, and home I went just as hard as I could go, screaming the top of my voice.

And there was copperheads in that country, snakes, and they're very poison. Mother thought, coming alongside of the garden I had perhaps got my foot on a copperhead and she ran to meet me. And I jumped up in her arms, screaming, hugging her and kissing her. And she said, "What's the matter, did you get snakebit?" Looked me all over. I said, "No, Mama! There's a man in that tree down there."

I said, "No, ma'am! There's a man in that tree, and He told me not to drink and not to smoke." And I was packing water to a 'moonshine Still', right then. And He said, "Don't you never drink or defile your body in any way." That's immoral, you know, young manhood with women. And to my best, I have never one time been guilty of such. The Lord helped me of those things, and as I go along you'll find out. So then, "Don't drink or don't smoke, or do not defile your body, for there will be a work for you to do when you get older."

And I never, from that day to this, ever passed by that tree again. I was scared. I'd go down the other side of the garden, because I thought there was a man up in that tree and He was talking to me, great deep Voice that spoke.

This Angel from the Presence of God stayed with the Prophet throughout his life. He would guide William Branham through to the fulfillment of his Commission. The Commission would become more clear as the Years passed. In 1933 Bro. Branham was told, in no uncertain terms what he was to do. In 1946 the Angel guided the Prophet into the first two phases of his unique ministry which was to climax with a third phase. Early February 1963 and February 28, 1963 brought into manifestation the 'third' and final phase of the Commission. We encourage the reader to throughtly search out the witness being given in these pages concerning a Minsitry which was and is God's last call of mercy to a Gentile World. Indeed the day of vengenance of our God has dawned.