His SON,
BILLY PAUL, IS BORN 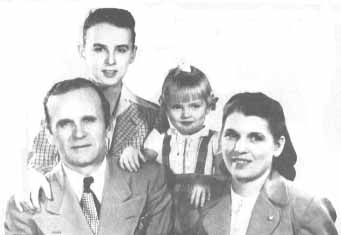 On September 13, 1935, a son was born to William and Hope Branham - they named him Billy Paul. Without a doubt, his birth brought joy to the Branham home. But this child was destined to witness "first hand" the unusual, Supernatural Ministry committed to the man whom, for almost 30 years, he would call 'Dad'.

His mother having passed away when he was less than two years old, the next twenty-eight years of his life would be lived in a close relationship with his father. Most of the time Brother Branham would take Billy Paul with him everywhere he went. In his "Life Story" (1959), Brother Branham spoke of the times when he would put Billy's bottle of milk in the inside pocket of his jacket, just to keep the milk warm for him.

As a little boy, Billy used to sell books for his father during the healing campaigns. He would wear a carpenter's nail apron around his waist and would walk up and down the isles before the service, offering for sale the three booklets which were prominent in Brother Branham's meetings at that time. They were: I Was Not Disobedient Unto The Heavenly Vison, Jesus Christ, the Same Yesterday, Today, and Forever, and Divine healing In The Branham Campaigns. the price was three for .25 cents.

Usually, one of Billy's uncles (Bro. Branham's natural brothers) would travel with Billy and his father. His uncle's duty was to give out the 'prayer cards' each night and help his 'dad' in and out of the service. Eventually, as Billy grew older, he would also be responsible for giving out prayer cards, notifying his father when it was time to come to the pulpit, and then at the end of the service to help his exhausted father off the platform to a waiting car.

It was never Dad's way to stay in high-priced accomodationswhen he travelled, but this was especially the case in those early years of ministry when our choice of lodging would best be described as being adequate, but humble. Dad and I spent many nights together in the cramped quarters of run-of-the-mill hotels, where the bathroom was not in your room, but at the end of the hall. Our 'stay' in these hotels were uneventful times, for the most part, with one remarkable exception.

We were in Vandalia, Illinois, and I was about 11 years old. Dad, Donnie (Dad's youngest brother), and I were all sleeping on one bed in a tiny room; and being the youngest, I was in the middle. It was very early in the morning, before dawn, when Dad nudged me awake. He was holding a pillow up next to my face, and when he was sure I was fully awake, he spoke in a low voice saying, "Billy, you know the Angel that Daddy talks about?"

"He's here," he continued, "He visited me tonight and told me about the coming meetings. He is still in the room right now, and I asked him if I could let you and Donnie see him. The angel told me, 'you can wake up your son, Billy.'"

He nodded his head towards a corner of the room where I knew there was a wash basin and mirror, but that spot was now being blocked from my view by the pillow. Dad said, "He's right over there by the wash basin. Would you like to see him?"

From the first time I'd heard Dad speak about the Angel that came and spoke with him and stood beside him, I had wondered what an Angel looked like. I don't know what I expected to see in our room that night - an airborne being with wings, I suppose. But that is not the way it was.

Dad lowered the pillow so that I could see, and I turned my heard towards the corner of the room. There stood a man dressed in white. Every detail of his face and clothing was visible to me, and in my mind's eye I can see those details as clearly today as I did then:

He was a large man, weighing perhaps 200 pounds (much larger than my Dad). His hair was very Dark and hung to his shoulders, touching the robe-like garment he wore. He had no beard, but his complexion was smooth and unlined, and the color of his skin was somewhat dark, nearly olive-toned. His arms were folded across his chest, and he was looking directly at us there on the bed. There was a kind and gentle look in his eyes that I cannot describe; And although he did not say a word to me, I sensed a communication between the Angel and Dad.

I began to tremble. Dad put his arms around me and said, "Don't be afraid of him, son. He has been sent from the Presence of God Almighty." 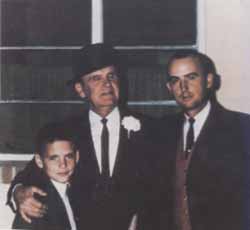 With my Dad's arms around me, I continued to look directly at the Angel. And after a few minutes the 'man's' form began to blend into a Pillar of Light. The Light became a mist which then vanished from the room. In it's place hung a "rainbow".

When Donnie awoke a short time later, the rainbow was still visible in the room, and together we watched the colorful beam of light as it hung there in the room for more than two hours.

When I grew older, I asked dad, "How come the Angel of the Lord let me see him that night?"

I'll never forget his reply. He said, "Because God called you to work with me, son, and he wanted to make Himself manifested to you." And I know that from that night in Vandalia on, no matter where we were, I never had to wait to hear Dad say, "He's here." I could always tell when that Presence was near.

And work with father, Billy did. He journey with him from house to house, town to town, state to state and from country to country. He witnessed the challenge of witch doctors and saw God move on the scene time after time to "vindicate" His servant. He saw demon powers silenced at his command. He was there when false brethren attempted deceive Brother Branham or challenge him on his doctrine, and he saw "that Angel" move on the scene to expose the "plans made in secret" by these false brethren.

He was there when Brother Branham challenged the leaders of "eastern religions" to heal the sick or open the eyes of the blind, in the name of their prophets and founders. Then Billy Paul watched as his father, stood before thousands of raw heathen and "In the Name of the Lord Jesus Christ" discerned the thoughts and intents of the hearts of men and women, expose demons, and pray the prayer of deliverance for the sick, the cripple, and the blind. 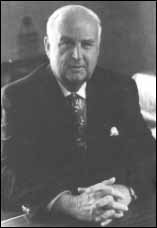 He witnessed the "Sign" in his hand; the "Discerning" (Hebrews 4:12) of the thoughts and intents of the heart, and "the Opening" of the Seven Seals of Revelation, chapters 5 - 10. His eyes have seen many miracles. He has witnessed the thoughts of many hearts being revealed and finally he stood with many others, in reverence as Once again the Presence of the Angel was witnessed night after night in Branham Tabernacle as the Mystery of the Seven Seals was revealed. He saw the man he called "Dad" wear his "Prophet's Mantle" fearlessly and faithfully.

Then on that fateful night, December 18, 1965, Billy Paul, witnessed the accident that would eventually claim his father's life. he was there to risk his own life in order to get Brother Branham out of the mangled wreck on a Texas highway. Again he was there when the Prophet bade farewell to this world. In December of 1965, Billy Paul was there to escort his father's coffin up the isle as the congregation sang "Only Believe". On January 26, 1966 at a Memorial Service - Billy Paul Speaks held by the Full Gospel Businessmen, Bro. Billy Paul Branham was called on to tell about his father - the accident and his last moments.

Today, Brother Billy Paul Branham oversees the activities of the William Branham Evangelistic Association, continuing to present a witness to the world of the Prophetic ministry which he was priviledged to witness in this Age.

To God Be The Glory, Great Things he hath Done