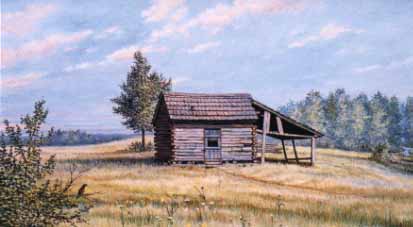 Rarely have those who have received an unusual calling from God been borned or raised in homes of the rich or aristocratic families. The Saviour Himself was cradled in a manager. John the Baptist came out of the wilderness, dressed in rude garments, eating locust and wild honey, screaming a message of repentance. He didn't demonstrate any of the ecclesiastical polished preaching of his day.

Therefore it would not be unusual for God, in this twentieth century, to ordain that His Prophet to the Gentiles of the last days would be born to poor parents in poor surroundings, YET with a witness of the Supernatural - It's just God's chosen way of doing things.

Brother Branham Tells The Story Of His Humble Birth And Up-Bringing:

I was born in a little mountain cabin, (pictured above) way up in the mountains of Kentucky. They had one room that we lived in, no rug on the floor, not even wood on the floor, it was just simply a bare floor. And a stump, top of a stump cut off with three legs on it, that was our table. And all those little Branhams would pile around there, and out on the front of the little old cabin, and wallowed out, looked like where a bunch of opposums had been wallowing out there in the dust, you know, all the little brothers. There was nine of us, and one little girl, and she really had a rough time amongst that bunch of boys. We have to respect her yet today from the things that we did in those days....

Remember that back behind the table we had just two chairs, and they were made out of limb bark. Just old hickory saplings put together, and the bottom of them laced with hickory bark. Did anybody ever see a hickory bark chair? Yeah. And I can hear Mama yet. Oh, later on when we got into a place where she could have a wooden floor, with those babies on her lap like this, and rocking that old chair just bangity, bangity, bang on the floor.

And Mother was nineteen years old when I was born, Dad was twenty-five. And I was the first of the nine children. Now, we was very poor, just the poorest of poor. And we did not even have a window in this little cabin. It had like a little wooden door that you open. I doubt whether you ever seen anything like that. A little wooden door that opened instead of a window, you keep it open in the daytime and you closed it at night. We couldn't turn on the electric lights or even burn kerosene in those days, we had what you call "a grease lamp." Now, I don't know whether you ever know what a grease lamp was. And did you ever burn a pine knot? For just take a pine knot and light it and lay it upon a lid, it'll burn - smoked up a little bit, but they had no furniture, anyhow, to smoke up. It drawed good 'cause there was plenty of roof up there for it to draw through.

And they told me that the morning I was born on April the 6th, 1909, Mother said that they opened up the window. Now, we had no doctors, there was a midwife - my grandmother. Mother wanted to see her child. And she was no more than a child herself. And when they opened up the little window, just at the break of day, about five o'clock. There was an old robin sitting by the side of a little bush. He was sitting at the side of the window, a-chirping as the robins sing.

And Dad pushed back the window. And when they pushed the little window door back, that Light that you see in the picture come whirling in the window, says my mother, and hung over the bed. Grandmother didn't know what to say.

Now, we was not a religious family. My people are Catholic. I'm Irish on both sides. My father is strictly Irish, Branham. My mother is Harvey; only, her father married a Cherokee Indian, so that broke the little line or the blood of the Irish. And father and Mother did not go to church, and they married out of the church and they had no religion at all. And back there in the mountains there was not even a Catholic Church.

And when they opened this window and this Light stood in there, they did not know what to do. Dad had bought him (Mama said) a new pair of overalls for this event. He was standing with his arms in the bib of the old overalls, like the woodsmen and loggers used in those days. And it (the Supernatural Light) frightened them.

Well, after I had got up maybe ten days old, or something, they taken me up to a little Baptist Church called "Opossum Kingdom Baptist Church". That's quite a name. There was an old circuit preacher, the old-fashioned Baptist preacher came through there about once every two months. They paid him each year with a sack of pumpkins and a few things like that. And the old preacher came by, and there he offered prayer for me as a little boy. That was my first trip to church.

Adapted from the book entitled: " Footsprints On The Sands Of Time", published by Voice of God Recordings, in Jeffersonville Indiana. The book is an anthology of excerpts taken from over eleven hundred recorded sermons by William Branham.