PREAMBLE
To The
SEVEN CHURCH AGES 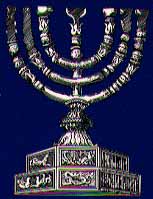 William Branham's National and International Ministry began in 1946 after the Angel appeared to him on May 6th. of that same year. Previous to this, Brother Branham was known only in and around Indiana, Kentucky and a few other states.

The Angel from the Presence of God commissioned Brother Branham to take a Message of Divine healing to the world. He would learn, by a vision received in late 1955, that this would encompass the First and Second Phase of his "Three Pull" (Phase) ministry.

In the 1955 vison, he was told that the First and Second Pull was only to attract the attention of the People to the "Third Pull" - The Opening of the Word (Revelation of the Mysteries contained in the Seven Seals as found in Revelation chapters 5 - 8 and Revelation 10:1-7. Brother Branham referred to the "Opening Of The Word - Seven Seals" as his "regular commission".

Previous to the opening of the Mystery of the Seven Seals, God was leading His Prophet one step at a time in the "Progressive Revelation" of this endtime ministry. In obedience to what the Angel told him in 1946, Brother Branham took the ministry of Divine Healing around the world. Christians from all religious backgrounds, Royality and Commoner alike were stirred by the uniqueness and Power that accompanied the ministry of this humble backwoods hillbilly. Church historians, referring to William Branham's halting speech and great humility recorded that "the common people heard him gladly". For Seven years (1946-1953) the world witnessed a manifestation of the Power of God such as was seen only in the time of Abraham (Genesis 18); the Old Testament Prophets; and our Lord Jesus Himself. NOW, it had return again, this time to the Gentiles to forerun the Second Coming of our Lord Jesus.

Brother Branham referred to these "Seven Years" of Supernatural signs and wonders as "God's Memorial". In a message entilted, "Israel and the Church - Part 5", preached March 29, 1953, Page 129, para. 7, he said, "I believe the Lord is fixing now - the reason he brought me out of the field and set me down - I believe it's His memorial, seven years. He's going to raise up another bracket, go on a little further." From here (1953) his ministry begin to change. In the ministry of His First Coming Jesus ministry CHANGED from the emphasis on 'signs and wonder' to "Teaching". Jesus rebuked the people saying, "Except ye see 'signs and wonders' ye will not believe" (John 4:48). Now, in the ministry of His Second coming, the ministry of the forerunner would change from emphasing 'signs and wonders' to "Teaching". The people would be given "the Word test".

Whereas in the past, Brother Branham's managers did most of the preaching in his campaigns, NOW, Brother Branham himself began to move to the front in preaching and teaching on the Word. From 1953 - 1960 he began to lay in teaching on individual doctrines of the Bible. This led him into deeper teaching (1960 - 1962) on the Church, the Church Ages; Adotpion; Daniel and prophecy for Israel - ALL leading up to the "Regular Commission" of the Revealing of the Mysteries under the Seven Seals.

The series on the Church Ages is significant in that it sits forth a detailed study of each Age in chronological order, and explaining the various major doctrines which the Church through the ages has sought to understand. In his introduction to the series when it was printed, Brother Branham said...

Like the first burst of a Roman candle, the Church Ages come forth with a mighty initial illumination, without which there could be no further light. But once the brilliance of the Seven Church Ages is given by Divine revelation, light upon light follows, until the whole of the Revelation opens wide before our wondering eyes; and we, edified and purified by its Spirit, are made ready for His glorious appearing, even our Lord and Saviour, the One True God, Jesus Christ."

In another statement Concerning the Series on the Church Ages, Brother Branham said.....

I've noticed on each one of these openings there has been a tremendous thing happen. And as we preached the Seven Church Ages, they were so perfectly, until the Holy Spirit Himself come down among us and Vindicated It, and put it upon the papers, and throwed it across the nation, and showed it in The Moon in the heaven, and proved it to us weeks and months before it happened, that just the way it would be, perfectly. Here in the Tabernacle He made it known. On the moon and the sun He made it known. And in the position of the nations at this time He made it known, as the hierarchy of Rome left and went back to Palestine; supposedly had been the first pope back since (they claim) Peter, being the pope. Now, it was so tremendous.

Me not knowing what I was drawing on the board for the church ages - God knows. Just by vision I drawed it, not knowing that God, a year and six months later, was going to vindicate it in the skies by the moon and slip it across the national papers. I didn't know that. I didn't know there'd be a mysterious blackout in the moon to represent this Laodicea age.

Now, on the papers (pictures of the eclipse) you only get the six ages. It's because the Laodicea church was blacked out completely. And if you notice the spiritual application? As God said it in the heaven... When I said it here on earth, I left a little bitty space, as you see, just a tiny little bit of light; that was just before the very elected was to be called from the earth, the reason I placed it on there for the seventh age; but when God put it in the heavens it was totally blacked out. Means maybe the last one is called from that Laodicea age; we don't know. There could be a sermon on it.

See, the Bible - this is just not someone trying to press something to you, but to reveal to you the very spiritual application of this hour. And then the next message (Note: the next series after the Church Ages)... That opened up the Seven Seals, which undone all the hidden mysteries of the Bible, the doctrines and so forth, which the world so rudely attacks nowadays, attacks It and says It's wrong.

But the reason for this special time was that - Upon my heart the Holy Spirit had laid this warning of conviction that the church in this day should have this message. Because I believe that it is the most outstanding messages of the Bible, because it reveals Christ in His church at this time. And then no one can have faith or know what they're doing or where they're going, unless they have something to base their thoughts and faith upon. Therefore, if the Scripture has revealed Christ to us in these last days and the condition of times, it would do us good to search it and find out where we're at.

The following pages will give you more detail concerning the Church Ages, the time spans, the Messengers and their Messages. I suggest that you use your "Back" and "Forward" buttons to navigate between this page and the ones listed below......

The 15 Messages preached in this series were transcribed and edited and printed as an "Exposition Of The Seven Church Ages". Bound in soft-cover with 381 pages and is available from the Voice of God Recordings, for $1.00 (U.S.). You may Email The William Branham Home Page for a pamphlet listing the books Available from their office.